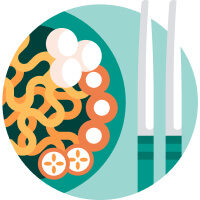 Food is one of the greatest pleasures humans have in life. It does more than just helping us sustain our bodies. It has the capacity to bring us back in time and across the borders. In this article, we will help you explore it in your essay about food and culture.

Food culture is the practices, beliefs, attitudes around the production, distribution, and consumption of food. Speaking about it, you can touch upon your local traditions or foreign cuisine. In essays, you can explore a variety of customs and habits related to food.

In this article, our experts have gathered tips on writing food culture essays. It will be easy for you to write an academic paper with them in mind. Moreover, you will find topics for your essay and will be able to see free samples written by other students. They are great to use for research or as guidelines.

Writing a cuisine essay is not much different from working on any other academic piece. And because of that, you need to apply the regular rules for writing, structuring, and formatting. As a student, you probably know them well now. However, it is not that easy to keep everything in mind, isn’t it? In this section, you’ll see what rules you need to follow when writing a food and culture essay.

A. Start with an introduction. Its goal is to intrigue your audience and establish your topic. B. Add a thesis statement. It’s the main idea expressed in the last sentence of the introductory paragraph. C. The body is where you argue your thesis statement and present your arguments and examples. D. In your conclusion, summarize your arguments and restate your thesis. Bring the essay to a new level by creating an impression that stays with the reader.

Gathering different ideas is one of the first steps of essay writing. Collect as many thoughts and arguments as possible. Later, in your research phase, you can develop only the best ones. Write at least ten different ideas, and then choose the one that interests you the most.

Food is a necessity; however, it is way more than that. We associate food with the most memorable moments of our life. Choosing a topic that demonstrates this connection is not an easy task. The issue needs to be well developed but narrow at the same time. Most importantly, try to write about something you are genuinely passionate about and have a formed opinion on.

Knowing your audience can help you decide what topic to pick and even what information to include in your paper. It also influences the tone, the voice, and the arguments you use. Consider your audience’s needs and academic background. It will help you determine your paper’s terminology, examples, and theoretical framework.

After you formulate your topic, it is time to dig into numerous sources. You can start by going to your school library and searching on the Internet. Consider visiting some ethnic restaurants in your area to get a first-hand experience of food culture. Every time you find new sources, ask yourself if this information necessary for your topic. Throughout this process, take notes. Write down precise numbers, dates, locations, names. All this data will help you greatly to write a cuisine essay in one sit.

Once your research is done, and you’ve determined the correct format for your food and culture essay, outline your work. You won’t lose track of the essential points and examples when you have the structure in front of you. An outline is like a map of your essay. It will show you how the entire piece works together.

This step is vital if you want to avoid any unnecessary mistakes and typos. Sometimes great ideas can have less impact due to errors. There are several things you can do. Try reading out loud, asking a friend for feedback, or using an online grammar checker.

If you still did not choose a topic for yourself, this is a place to start. We’ve gathered this list so you can pick one and develop a good essay about food and culture. Besides, check our title generator that will come up with more ideas.

Thanks for your attention! Hopefully, you found our tips helpful. Good luck and Bon appetite! Further down, you can click the links and read food culture and foreign cuisine essays for your inspiration.