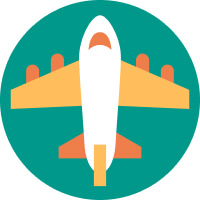 Air transportation essays could be assigned both in school and at a college level. Besides, the aviation industry is a topic frequently used in language tests such as IELTS and TOEFL. Thus, learning the fundamentals can be extremely helpful for you. Our experts have prepared this article where you can find all the essential information for the task.

Air transportation is a highly specialized area that involves the movement of people and cargo across the air. This can include any aircraft, such as commercial and non-commercial airplanes or helicopters. In recent years, traveling by air has become one of the most preferred methods of transportation.

Flying is one of the most efficient modes of travel. These days, planes can go almost anywhere in the world. With the technology we have, both passengers and cargo can be delivered halfway around the globe in a matter of hours. Besides, the high standards of security make air travel exceptionally safe.

There are multitudes of reasons why you might need to write an essay on air transport. Over here, we have gathered several aviation-related topics for you to browse through. We have also listed different types of air transport. Finally, below, you will find free samples written by students like you.

There are several types of air transport that you can analyze. You might want to compare and contrast them or perhaps talk about their advantages and disadvantages. In any case, this information will be useful for your essay.

Here are the most widely known air transport examples:

Airplanes. As one of the most common methods of air transport, planes move both cargo and people. They are an essential component of the tourism industry. Also, they are used privately and in military settings. Today, planes are imperative for long-distance and international travel.

Helicopters. While used less often than airplanes, helicopters are still crucial for the aviation industry. They are typically utilized in areas where a plane usually wouldn’t fit. Helicopters are also used by the police, rescue parties, firefighters, films crews, and news agencies. Unlike airplanes, they can hover in place for an extended amount of time.

Zeppelins & Blimps. A zeppelin is a large balloon-like aircraft filled with helium and propelled by an engine. It has an internal metal framework to help maintain the shape. A blimp is similar, except it’s only contoured inside. These aircraft are typically used for advertisement purposes.

Hot Air Balloons. This aircraft is very appropriately named. It is a large canvas bag that has a basket attached to the bottom. The open flame underneath the bag provides the hot air inside that lifts the contraption off the ground. People ride in hot air balloons for entertainment and sightseeing purposes.

Gliders. This is a type of air vehicle that does not involve an engine. These mechanisms have different designs and constructions. As for their purpose, they are usually used in sports, such as paragliding.

There is one key tip on writing a stellar essay on airways or air transportation in general. We recommend finding an idea that will interest you. Your work will turn out best if you already have a particular vision in mind. For this purpose, try our topic generator – it will formulate numerous ideas for you.

Thank you for reading! An air transport essay can be challenging if you don’t know where to begin. This is why we hope that this article has managed to inspire and motivate you.

Now, you can proceed to the air transportation essay examples below. Summarize them to see only short versions.