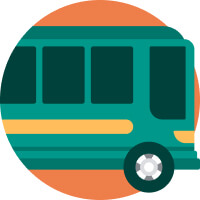 There are several answers to the question of what land transport is. First, it refers to the movement of people, goods, or animals from one location to another on the ground. It is also the vehicles that move on land, such as cars, bikes, trains, etc. There are two main types of land transportation: the transport of goods and the travel of people.

The importance of road transport is that it links people and communities with one another. It allows for travel through challenging terrains, such as forests and mountains, in any weather condition. Land transport also permits the delivery of large amounts of goods across large distances.

In this article, our team of experts gathered everything that will help you write your essay on land transport. We have examined what modes and systems of road transportation exist. Additionally, we’ve compiled a list of topics for your consideration. Under the article, you will find free land transport essay examples written by other students.

There are various modes of land transportation, and each has its purpose. We have explored them here and wrote a few lines on means of transport. You can explore them in your assignment.

The means of rail transportation are known as railway or railroad. There are several types of trains: long-distance trains, short-distance trains, automated people movers, and freight trains. Railway transport is famous for the relatively low pollution levels and lower costs than other means of transportation. Another thing you should know is that a train can carry both passengers and freight. Cargo trains can transport agriculture, chemicals, raw materials, energy, and forest production.

It is not a traditional means of transportation as it does not utilize vehicles. A pipeline is perfect for the long-distance transport of liquids or gases through pipes. Usually, it happens for mass consumption, and the law strictly regulates this method. Plus, pipelines are used to transport natural gasses, petroleum, or crude oil. There are also short-distance systems that transport sewage, water, and beer.

Most towns and cities on the planet are encompassed by roads created specifically for traveling. Even in places where the roads have no names, there are many recognizable routes through which people and vehicles travel. It is the most common form of land transport, and the most common road vehicle is a car. Other vehicles include buses, trucks, motorcycles, and bicycles. Pedestrians also use roads for moving from one place to another.

The land transportation sector can further be divided into above-ground and underground. The metro and subway systems, as well as some pipelines, fall into the underground category. Above-ground transportation refers to means such as cable transport. It includes elevators, escalators, and ski lifts. These methods of transportation are usually used at steep gradients to ascend atop mountains. They can also be used to traverse long distances over cliff drops.

Very often, you can get overwhelmed with the number of essay ideas. It is not always clear which of them you should concentrate your writing on. That is why over here, we have gathered some transport essay topics. You can use them either for inspiration or for practice. For more ideas, try out our title generator.

You can use the following topics for any land transportation essay:

Thank you for your attention. We hope that you have found this article helpful in your work. Now, you can start going through the land transport essay samples below. And to reduce your reading time, you can also use our online text summarizer!