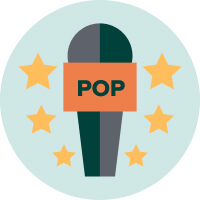 Popular culture essays are becoming an increasingly prevailing task for students from different majors. Yet, if you want to write an indeed great paper, you should first figure out how to define the phenomenon.

Popular culture is the set of trends that predominates at the current time. It is determined by several aspects, including clothing style, language use (slang, traditional greetings, etc.), food choices, and social media use.

The role of pop culture in the modern world cannot be underestimated. First and foremost, it helps teenagers find themselves in the social context. Secondly, popular culture sets the acceptable norms of behavior. This way, people clearly understand how to act in society to fit in. Finally, pop culture enhances the connection between the community members.

Our team has prepared tips for writing popular culture essays. They will help you to deal with any topic in this area. Besides, we have some excellent ideas for your paper or practice. Under the article, you will find pop culture essay examples written by fellow students.

If you’re interested in how to write a pop culture essay, this section is for you. Here, we have collected some essential pieces of advice that will assist in composing your paper.

Are you familiar with that feeling when you have a blank Word document in front of you and zero ideas of what to write about? Other essays can help you! Read some samples on this subject and get inspired to compose your paper. Besides, checking examples can assist you in figuring out the structure and argumentation.

Getting an idea for your essay is the first step of preparation. Try to stay creative and reasonable while choosing a topic. Make sure that it is neither too narrow nor too broad. Also, check if you have enough information to develop solid arguments and support your claims.

This step provides a ground for the entire paper. Ensure that you get only credible information and use reliable sources. Think critically and evaluate every source you use.

Clearly formulate your thesis statement. It will be your position and key message. Keep in mind that all people have different points of view. So, be ready to defend your position. Present strong arguments, valid supportive details, and appropriate examples.

Try to understand how your research topic can be integrated with the real world. What practical applications will your paper have? How to put your essay idea in a real-life context? The answers can give you the right direction for your essay writing process.

The hook of your pop culture essay should be dynamic. Think about the most creative ways to grab the readers’ attention. Make them desire to read your paper till the very end. These are some ideas: a memorable quote, a personal story, an anecdote, shocking statistics, or anything that you find engaging and catchy.

Make a clear outline that would include an introduction (with a thesis statement), body paragraphs, and conclusion. Present your ideas in a logical order and have valid evidence for each of your arguments. Then write a coherent and well-structured pop culture essay. And don’t forget to proofread the completed assignment before submitting it!

Now, as we have discovered the theoretical part, let’s move to practice! In the list below, you will find 13 popular culture essay topics. Use one of them to write your original work. If these ideas are not enough for you, you can use our title generator.

Here are some topics for you to look through:

Thank you for your attention! You can now move to the pop culture writing examples below. And to read them faster, use the summarizing tool.