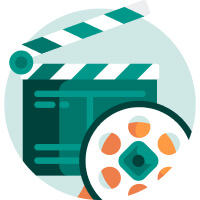 A film is an art form that has become a staple in our collective human culture. It is relatively young compared to other mediums but no less important.

Yet, if we talk about cinema in general, we can focus on its different meanings. The term has a wide variety of meanings and interpretations. It can obviously mean a movie. It can also refer to the building in which they are shown. At the same time, this concept encompasses the process of making a film and redistributing it. Cinema can also refer to cinematography itself – the production of movies.

If you are dealing with cinema as an art form essay, you can write about thousands of things. From the plot development to the evolution of special effect techniques, film studies are diverse and varied. Here, our experts have gathered some cinema essay topics for you to consider. We have also looked at the ways of analyzing movies. It might come in useful in your work. At the bottom of the page, you can find cinema essay examples. They can serve as inspiration for your paper.

The influence of cinema on society is evident. A movie can have a positive or a negative impact on the world, being a driving force for change. It can take the form of self-expression or social commentary. It can also become a powerful tool of political propaganda. Thus, studying the functions of films is relevant in today’s world.

To write a film as an art form essay, you will have to conduct thorough research. You will delve into examples of cinema art or study an entire cinematographic movement. Here, we have looked at some ways of analyzing motion pictures – you can use them for your assignment.

Historical analysis, also known as cultural, is the type you will encounter most often. Via historical analysis, you look at a film in a broad context of the time and places it was made. Cinema always comments on the culture and period, whether intentionally or not. Looking at the things represented and the commentary on the society is the key to historical analysis.

With this type, you should examine the story that a film is trying to tell. Take a look at the plot, characters, settings, and even cinematographic elements. Then, connect their meaning to the overall message of the story. Here you should focus on how filmmakers weave a coherent and powerful narrative.

The goal of the semiotic analysis is to make sense of the symbols, analogies, and metaphors shown. Such elements are not always evident. So, it takes a certain depth of perception to spot them in the first place. Characters, plot details, and even simple objects can be represented metaphorically in a movie. Semiotic analysis is better suited for avant-garde cinema rather than things like documentaries or video essays.

“Mise-en-scène” directly translates to “staging.” As expected, this type of analysis takes a look at the composition of a film. The framing of the shots, the arrangement of the scenes, and the way they tie together have a particular meaning. There are many elements to consider when studying the staging of a movie. From costume design to set lightning, there is a reason behind every decision of the filmmakers.

Whichever type of analysis you choose, the success of your essay largely depends on the idea you want to explore. This is why here we have come up with some film essay topics. We hope that they will help jumpstart your work. Plus, you can try the topic generator that will create new ideas for you!

Here are some cinema essay topics for you:

Thank you for reading! We hope that these suggestions and ideas proved useful to you. You can now proceed to read the cinema essay examples we have provided below.