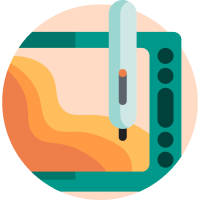 Visual arts are the works of art we see with our eyes. It is a broad definition that includes a large number of disciplines and elements. From Wassily Kandinsky to Jackson Pollock, from sculptures and paintings to filmmaking and interior design – the term covers it all.

If you are writing an essay about visual arts, the chances are that you will find yourself a bit lost for words. After all, the subject matter may seem contradictory to the task at hand. However, there is no need to panic.

In this article, our experts have outlined the best way to write your very own visual arts essay step-by-step. You will see that your academic paper can be a work of art in itself. We have also included 19 outstanding visual arts essay topics from which you can choose.

Even a brief essay about visual arts can be overwhelming. It’s usually the case when you don’t know where to begin and how to organize your thoughts. That’s why creating an outline is so crucial. In this section, we have listed what can help you in writing your visual arts essay.

Whether you are writing a brief response piece or an entire extended essay, following these steps will improve the quality of your work. With enough practice, you will be composing visual arts essays with your eyes closed.

Still uncertain whether to write about Pablo Picasso or The Color Theory? Take a quick look at this list! Or allow our title generator to create an idea for you.

Here are 19 visual arts essay topics we have compiled just for you: