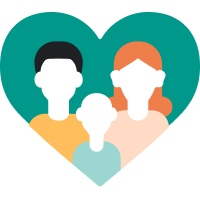 How would you define family life? There are numerous ways to explain this notion. Let’s make it as simple as possible. In essence, family life is the set of routine activities that a family has together daily.

The importance of family life can’t be underestimated. It is essential to create a positive environment within the household. Building trusting relationships between all the family members is necessary for happiness and comfort. From the very first days of life, kids absorb the behavioral model of their parents. Thus, a happy family is a key to a child’s positive growth and emotional development.

Of course, a warm and supportive relationship is not a feature of every family. However, while writing a family life essay, everyone will have something to discuss. Our experts have collected tips and ideas for completing this task. Also, below you will find examples of family life writing.

Everyone has their own situations and problems at home. For some, they can be predominantly negative. That is to say, describing personal experiences in the family can be challenging for many students. Yet, anyone can complete such a task with at least a bit of sincerity. Here we have provided tips that can help you with this.

To write an essay about family life, you should adhere to the following structure:

In the first paragraph, speak about general family issues that would set the scene for your essay. Try to engage the readers with your topic. You can introduce your family or briefly describe the problem you are going to explore. Also, there are some ways to start your essay dynamically. For example, you can find some statistics that would fit your topic or select a memorable quote.

It is an essential element of your essay about family. Here, you need to formulate your position clearly and precisely. There are plenty of ideas on what to include in the thesis. It depends on the topic you selected for your essay. Just be creative! Or create a perfect one with our thesis generator online.

In this section, develop each point you mentioned in the thesis statement. Each paragraph should have a topic sentence at the beginning. It will guide your readers through your ideas. Also, find appropriate supportive details and examples for each of your arguments. This will make your ideas solid.

For instance, your thesis statement is the following:

Three key features of a strong modern family are trust, support, and commitment.

In this case, your topic sentences of body paragraphs will be:

Wrap up your essay by concisely summarizing your key points. Our conclusion generator can help you with that. Make your paper memorable by concluding it with a final thought or a call for action. You can ask your readers to reflect on their families’ personal experiences, for example. Another way to finish your essay is to create a space for further investigation of your topic.

For any essay on family, you need an appropriate topic. Completing such a task requires sincerity. So, you need to find an idea that you feel comfortable writing about. In this section, pick one that will help you compose all the necessary paragraphs about your family.

Take a look at the following family life essay topics:

Thanks for reading! You can now check our free family life essay examples below. Learn some wonderful stories about other students and their loved ones.