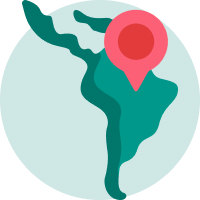 Latin America is a group of countries from the South American continent. It includes Mexico, Central America, and the islands of the Caribbean, where they speak the Romance language.

Latin American presents a mixture of many cultures. African, Indigenous, and European cultures had the most impact on it. One of the examples of this mixture might be the Mexican folk music “Son.”

In this article, you’ll see methods and advice for writing a Latin America essay. You will find them helpful for creating any project related to the culture and history. Plus, our experts have composed Latin America essay topics that you can use for practice.

Latin America is diverse and fascinating to learn about. Writing an essay about it might be a pleasure, especially if you read our recommendations. They’ll help you follow the academic structure and express your point correctly.

Here are our tips on composing an essay about Latin America:

Now, you can proceed to write your essay using our advice. The only thing you are missing is a good topic idea. You can come up with one yourself, use our topic generator, or pick one from the list below.

So, here are 23 Latin America topics you can use for your essay:

Thanks for reading! You can find free Latin America essay examples below. They are great for learning how to provide your argumentation.